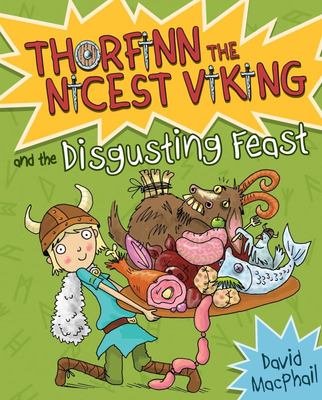 Thorfinn and the Disgusting Feast (Thorfinn The Nicest Viking #4)

Prepare yourself for the wrath of the Norsemen! That is, if you don't mind and it's not too inconvenient...Everyone knows Vikings are ruthless barbarians whose idea of a good time involves pillaging, plundering and feasting. But Thorfinn is no ordinary Viking! He is always polite and happily offers to wash the dirty dishes. Too bad his dad is Harald the Skull-Splitter, Village Chief and the roughest and toughest Viking of them all. The king of Norway is coming to visit Indgar village and Thorfinn is named Head Chef for the greatest feast the village has ever seen. Apparently the king has a taste for exotic fish, but he's also been known to catapult chefs who displease him into the sea! Thorfinn sets sail for Orkney with a ragtag crew to visit his Uncle Rolf and learn how to cook and catch fish. But it seems a poisoner is at large and he has his eyes on the poisson...Thorfinn the Nicest Viking is a funny, illustrated, action-packed new series for young readers which bridges the gap between Horrid Henry and Diary of a Wimpy Kid, set in a world where manners mean nothing and politeness is pointless!

David MacPhail left home at eighteen to travel the world and have adventures. After working as a chicken wrangler, a ghost-tour guide and a waiter on a tropical island, he now has the sensible job of writing about yetis and Vikings. At home in Perthshire, Scotland, he exists on a diet of cream buns and zombie movies. David is also the author of Yeti on the Loose and the Thorfinn the Nicest Viking series. Richard Morgan was born and raised by goblins on the Yorkshire moors. He has painted backgrounds for Disney TV and now writes and illustrates children's books. He lives in Cambridge, England, and has a family of goblins of his own.